The St. Louis Symphony is off to Carnegie Hall this week, but there's still plenty of great music in town.

The Cathedral Basilica of St. Louis presents a concert by Pomerium on Saturday, March 21, at 8 p.m.  "Pomerium was founded by Alexander Blachly in New York in 1972 to perform music composed for the famous chapel choirs of the Renaissance. Widely known for its interpretations of Du Fay, Ockeghem, Busnoys, Josquin, Lassus, and Palestrina, the 15-voice a cappella ensemble has performed for numerous international festivals."  The Cathedral is at 4431 Lindell in the Central West End.  For more information: cathedralconcerts.org.

The Community Music School of Webster University presents an Emerging Composers Concert on Saturday, March 21, at 3 p.m. "Winning compositions from the Young Composers Competition will be performed by professional musicians. The concert will include A Middle Quartet (“In Medias Res”), an original work by guest composer, Dr. Don Freund. Professor of Composition at Indiana University, Dr. Freund’s work has been described as 'exciting, amusing, disturbing, beautiful and always fascinating,' Music and Musicians, London."  The Community Music School is located at 535 Garden Avenue on the Webster University Campus.  For more information: 314-968-5939.

The St. Louis Symphony’s Crescendo Circle presents Sips and Symphonies on Thursday, March 19, at 7:30 PM.  “What is Sips and Symphonies? It is a great way to learn about music in a fun, casual environment.”  A special cocktail is created for each event to accompany the music.  The event takes place at The Tavern of Fine Arts, 313 Belt in the Debaliviere Place neighborhood.   For more information: tavern-of-fine-arts.blogspot.com. 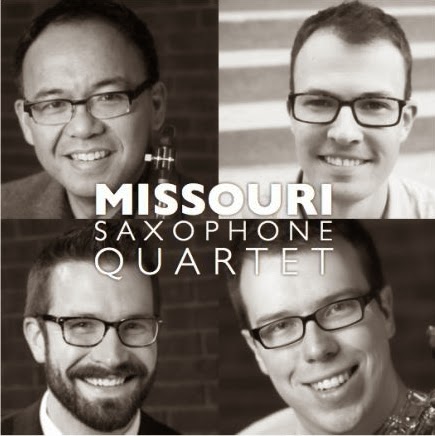 Washington University presents the Missouri Saxophone Quartet on Monday, March 16, at 7:30 p.m. "The Missouri Saxophone Quartet (MSQ) was formed in 2009 and is devoted to exploring and promoting new music, particularly that of Missouri composers. The group has inspired several commissions which they have presented at venues such as the World Saxophone Congress in St. Andrews, Scotland, the North American Saxophone Alliance’s Biennial Conferences at the University of Georgia and the University of Illinois, the United States Navy Band’s International Saxophone Symposium in Fairfax, Virginia, and the Odyssey Chamber Music Series of Columbia, Missouri. The MSQ performs a wide variety of styles from baroque transcriptions, to traditional French repertoire, to jazz and tango, and the avant-garde. The MSQ is also committed to educational outreach, having performed at numerous high schools throughout the State of Missouri." The performance takes place at the Danforth University Center, 1 Brookings Drive on the Washington University campus.  For more information: news.wustl.edu.

Washington University presents The Washington University Choirs with special guests More Fools Than Wise in Just Folks  on Friday, March 20, at 8 p.m.  "The Washington University choirs draw their membership from the best singers in the Washington University community. Students from the schools of Art and Architecture, Law, Business, Medicine, Engineering as well as Arts and Sciences participate in a season which includes appearances on and off campus, both within and outside of St. Louis. A highlight of the year is the Annual Chancellor’s Concert, a joint appearance with the Washington University Symphony Orchestra, held in the spring in the E. Desmond Lee Concert Hall. The Chamber Choir and Men’s and Women’s Glee Clubs perform masterworks from six centuries and many cultures, encompassing sacred and secular works, folk and art music, and both accompanied and a cappella repertoire."  The performance takes place at the 560 Music Center, 560 Trinity in University City.  For more information: news.wustl.edu.

The Washington University Department of Music presents a lecture by Jennifer Psujek, Ph.D. Candidate in Musicology, on Friday, March 20, at 4 p.m.  The topic of the lecture is ‘Free to do Anything’: Fight Club (1999), Indiewood and the Composite Score at the Turn of the 21st Century and it takes place in the Music Classroom Building at 1 Brookings Drive on the Washington University campus.  For more information: news.wustl.edu.

Published in Chuck Lavazzi
Tagged under