An innovative version of a classic fairy tale joins the list this week.

The St. Louis Family Theatre Series presents the Lightwire Theatre Company production of The Ugly Duckling Sunday at 2 pm, March 3 and 9, and Friday at 7:30 pm, March 10. "Lightwire Theater brings a classic tale to the modern stage in an unforgettable theatrical experience. Lined with electroluminescent wire, the beloved story of The Ugly Duckling plays out on stage through a cutting-edge blend of puppetry, technology and dance. With dazzling visuals, poignant choreography and the creative use of music from classical to pop, this production brings this story into a new and brilliant light. " Performances take place at the Florissant Civic Center Theatre at Parker and Waterford in Florissant, MO. For more information, call 314-921-5678 or visit www.florissantmo.com

My take: I don't normally list children's theatre here, but Lightwire's show appears to be something all ages can enjoy. Hans Christian Andersen's fairy tale has been updated to include a ninja-style battle between the duckling and an alley cat looking for a bit of duck dinner, and if the video promos I have seen are any indication, the visuals are stunning. The Advocate calls it "a total delight." Take the kids and check it out. 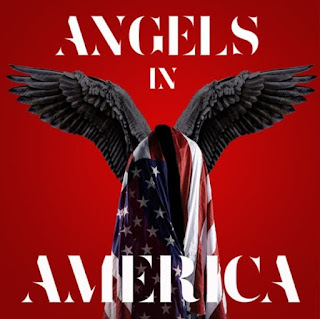 The Performing Arts Department at Washington University presents Angels in America, Part 1: Millennium Approaches Fridays at 7 pm, Saturday at 2 and 7 pm, and Sundays at 2 pm through March 3. "Perhaps Jack Kroll in Newsweek described Millennium Approaches best: "The most ambitious American play of our time: an epic that ranges from earth to heaven; focuses on politics, sex and religion; transports us to Washington, the Kremlin, the South Bronx, Salt Lake City and Antarctica; deals with Jews, Mormons, WASPs, blacks; switches between realism and fantasy, from the tragedy of AIDS to the camp comedy of drag queens to the death or at least the absconding of God." The performances take place in the Edison Theatre on the Washington University campus. For more information, call 314-935-6543 or visit pad.artsci.wustl.edu.

My take: I haven't seen the Washington University production, but if you haven't already experience this remarkable piece of theatre, I'm recommending that you do so purely on the strength of the script. As I wrote in my review of the 1996 tour of this show, Angels in America boasts some of the most intelligent and compelling dramatic and comedic writing to grace the American stage in decades.

The Playhouse at Westport Plaza presents the musical Avenue Q running through March 17 (extended from March 3rd). "Part flesh, part felt and packed with heart, AVENUE Q is a laugh-out-loud musical telling the timeless story of a bright-eyed college grad named Princeton. When he arrives in the city with big dreams and a tiny bank account, he has to move into a shabby apartment all the way out on AVENUE Q. Still, the neighbors seem nice. There, he meets Kate (the girl next door), Lucy (the slut), Rod (the Republican), Trekkie (the internet entrepreneur), superintendent Gary Coleman (yes, that Gary Coleman) and other new friends! Together, they struggle to find jobs, dates, and their ever-elusive purpose in life." The Playhouse at Westport Plaza is at 635 West Port Plaza. For more information: www.playhouseatwestport.com.

My take: A smart, hip, and very funny parody of Sesame Street, Avenue Q is also an entertaining (if R-rated) story of college-educated twentysomethings--both flesh and foam rubber--coming to grips with the economic, political and sexual facts of life. The show is good, not-so-clean fun and always worth seeing. This production is "outrageously funny" (Calvin Wilson, STLToday). "A blend of national and local talent brings zest, exquisite precision and rampant enthusiasm to this delightful version of the Tony Award-winning musical melange of puppeteered optimism at its finest," writes Mark Bretz at Ladue News.

The Black Rep presents Milk Like Sugar opening on Wednesday, February 13, and running through March 3. "Milk Like Sugar is an astute gut-wrenching observation of the impact of racism on African American youth. We see the cyclical nature of inherited trauma, the normalization of underfunded communities, the dire need for education that nurtures latent talent, childhood hunger, the categorization of Black youth as adults, and the injustice of the criminal system. The myth of self-determination and seeing those who cannot escape their circumstance as inferior is keeping us for mobilizing and tithing whatever time and talent we might have to give into those communities. This play affirms these children need us, just as much as we need them." Performances take place at the Hotchner Studio Theatre on the Washington University campus. For more information: theblackrep.org.

My take: Once again, the Black Rep presents an important new lay that tackles contemporary issues in a dramatically effective way. In his review for STLToday, Calvin Wilson calls this "an intriguing portrait of working-class life in the tradition of Lorraine Hansberry's 'A Raisin in the Sun' and John Osborne's 'Look Back in Anger'...In a culture that all too frequently demonizes African-American youth, 'Milk Like Sugar' is a much-needed and admirably nuanced response." "Director Nicole Brewer and her youthful, talented cast capture the essence of this convincing and thoughtful drama," writes Mark Bretz at Ladue News.

The Repertory Theatre of St. Louis presents the drama Oslo running through March 3. "Winner of the 2017 Tony Award for Best Play. In 1993, two bitter enemies shocked the world by shaking hands and agreeing to work toward peace. This breathtaking drama tells the story of the secretive and precarious negotiations that made that moment possible. By focusing on the Norwegian couple who brokered talks between the Israelis and Palestinians, Oslo finds the unlikely story behind this historic event." Performances take place at the Loretto-Hilton Center on the Webster University campus. For more information: repstl.org

My take: The Oslo peace accords might not seem as the most likely subject for a successful play, but then, neither would nuclear physics, and that didn't stop Michael Frayn from writing a hit with Copenhagen. In fact, as Ann Lemmons Pollack writes, "how the accord came to be is a fascinating and very human story about how individuals can make a difference in the world...It's a fascinating play, well written and surprisingly funny." At Ladue News, Mark Bretz writes that "Steven Woof, The Rep's Augustin artistic director, makes his final directorial effort at the helm of The Rep a smashing success with this riveting, superbly acted and beautifully modulated production." I saw this last weekend and was completely captivated by it.

Published in Chuck Lavazzi
Tagged under