Even though Richard Matheson’s novel I AM LEGEND has been filmed three times (officially), only one of the film versions worked with a script by Matheson himself (though billed as -‘Logan Swanson’). Originally a Hammer Film property (how great would that have been?), Matheson’s script was eventually sold to Lippert Productions and made cheaply in Italy with an Italian cast and crew, as THE LAST MAN ON EARTH (1964). For its bankable American star, Vincent Price was cast as the lead. Price was at the peak of his popularity from a series of brilliant Edgar Allan Poe adaptations directed by Roger Corman (the producers wisely emphasized the horrific elements of Matheson’s story with Price’s image in the advertising). But in LAST MAN Price delivers one of his best performances as the only ‘human’Â left after a biological plague has decimated the population. Whether he’s dealing with feelings of loneliness and grief, or simply displaying human pettiness, Price imbues the film with a sense of quiet despair. Price appears in nearly every frame of the film, and dominates the story with his great persona. Today, despite its low budget and black & white cinematography, with its remarkable opening scenes of death and desolation, and of Price nightly withstanding the siege of ‘vampires’, the film is viewed as a highly influential (George Romero cites it as an inspiration) and memorable version of the famous tale.

A Facebook invite for the event can be found HERE

$6  for the screening. A yummy variety of food from Schlafly’s kitchen is available as are plenty of pints of their famous home-brewed suds.

“Culture Shock” is the name of a film series here in St. Louis that is the cornerstone project of a social enterprise that is an ongoing source of support for Helping Kids Together( http://www.helpingkidstogether.com/) a St. Louis based social enterprise dedicated to building cultural diversity and social awareness among young people through the arts and active living.

The films featured for “Culture Shock” demonstrate an artistic representation of culture shock materialized through mixed genre and budgets spanning music, film and theater. Through ‘A Film Series’ working relationship with Schlafly Bottleworks, they seek to provide film lovers with an offbeat mix of dinner and a movie opportunities. 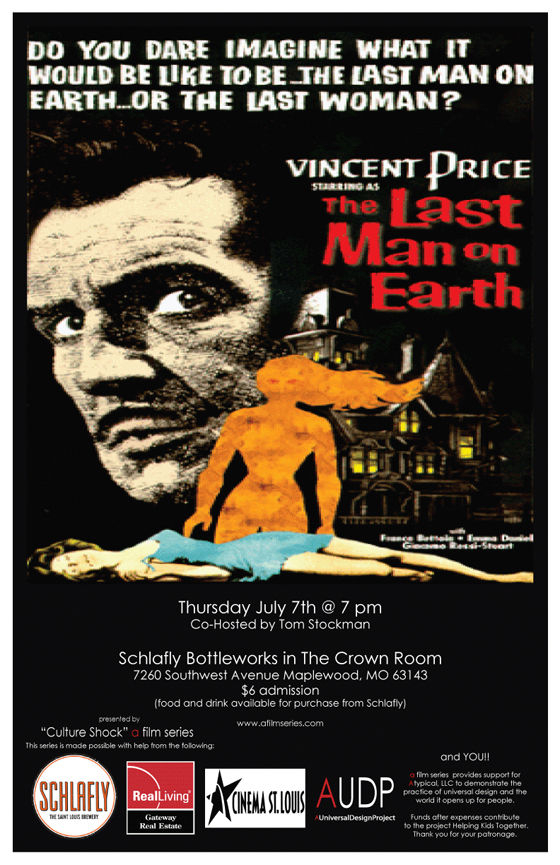 More in this category: « St Louis Legend Vincent Price in THE LAST MAN ON EARTH July 7th at Schlafly Bottleworks See Liz Taylor and Richard Burton in WHO’S AFRAID OF VIRGINIA WOOLF? This Weekend at Webster University »
back to top