Director Mike Nichol’s WHO’S AFRAID OF VIRGINIA WOOLF?  a famous and shocking black comedy from 1966, is based on Edward Albee’s scandalous play of the same name. First performed in New York in October of 1962, it captured the New York Drama Critics Circle Award and the Tony Award for the 1962-63 season.

We are introduced to George (Richard Burton), a middle-aged history professor, and his acerbic wife, Martha (Elizabeth Taylor).The movie presents an all-night drinking bout of the couple, joined by a vacuous biology professor, Nick (George Seagal), and his wife, Honey (Sandy Dennis).Through the verbal torturing of one another, George and Martha eventually achieve catharsis by exercising their fixation about a nonexistent son.

George and Martha, the older couple, had created an imaginary son to sustain themselves. At first drawn together in their horror, Nick and Honey soon find themselves sucked into the spiral of buried resentments and unspoken rage. Yet as the seemingly perfect marriage of Nick and Honey begins to reveal its many flaws, George and Martha find their own twisted bond within the mutual rancor… 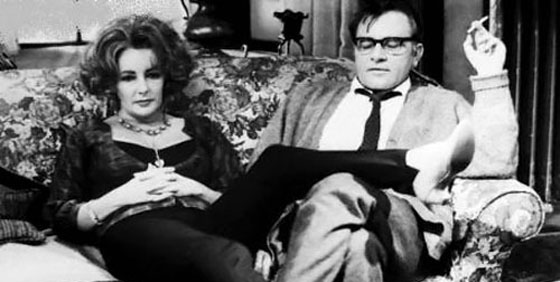 The performances are brilliant. The on screen chemistry between former real-life couple Taylor and Burton adds sparks to Ernest Lehman’s tight script. Haskell Wexler’s phenomenal black-and-white cinematography only heightens the emotions on this non-stop two-hour roller coaster and now you’ll have the chance to see it on the big screen when it plays this weekend at Webster University.

$6 for the general public
$5 for seniors, Webster alumni and students from other schools
$4 for Webster University staff and faculty

Advance tickets are available from the cashier before each screening or contact the Film Series office (314-246-7525) for more options. The Film Series can only accept cash or check.

The Webster University Film Series site can be found HERE

More in this category: « St Louis Legend Vincent Price in THE LAST MAN ON EARTH July 7th at Schlafly Bottleworks
back to top